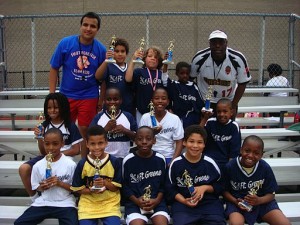 The Fort Greene “SEAHAWKS” U6 soccer team beat arch rival Young Rock in the first ever Brooklyn Cup For Kids! The Seahawks won in a “shoot-out”! when Noah Greenberg tallied the final kick! The youngsters defeated several local clubs in a day-long tournament sponsored by Cookies Stores.

The 11U “Arsenal” team lost in the semi-finals to Downtown United. The team was led by the goal-scoring of Francisco Haye and midfield play of winger Ronan Davis. The Brooklyn Cup was created by Long Island University’s Michael Randazzo and is sponsored by COOKIE’S.